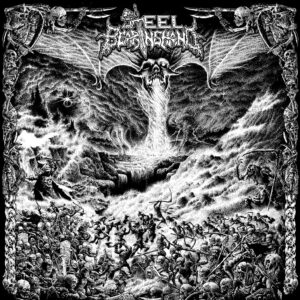 It was the band’s logo that did it. Skulking around the promo bin like a slightly more disheveled Grima Wormtongue, I noticed this monstrosity right away. Take a closer look and you’ll see everything that makes metal metal: “Steel” written out with trve 80s flair (the ‘S’ is actually a steel bearing hand, guys!) nestled atop a more grotesque “Bearing Hand”, contorted, razor-sharp and deadly, book-ended by the ubiquitous devil horns. It’s the perfect statement for a self-proclaimed death/thrash group eager to meld genres and melt faces. Coupled with intricate, black-and-white cover art that calls to mind the barbaric and fiercely fun LIK, I was eager to see what this Texas foursome with only one other full-length under their bullet-studded belt was all about.

Steel Bearing Hand play a chugging, squealing hybrid of death and thrash, with a few blackened elements thrown in for good measure, an approach that serves them well on Slay in Hell when they mind the guard rails. The first two tracks, “Command of the Infernal Exarch” and “The Liche Gate” are both rapid-fire, three-minute-long bludgeon fests from completely different worlds. The first is a blistering, thrashy, proudly nasty number boasting unexpected black metal rasps and solid riffs. The second is a chunkier, death-infused tune with vocals right out of the Bear Mace playbook. Taken together, this approach is a surprising, effective way to genre-hop, explore expectations and keep the listener guessing. It’s also indicative of one of Slay in Hell’s strengths as an album. But guard rails are there for a reason, and on Slay in Hell, those rails are made of poorly stacked Jenga pieces.

When the wheels come off after only two tracks on such a short album, it’s more than just noticeable; it’s the equivalent of aural whiplash. Slay in Hell is ridiculously front-loaded (with only six tracks and clocking in at a little over 39 minutes, “front-loaded” accounts for all of seven minutes and change) and that hurts the album as a whole. None of the remaining tracks are bad – there’s a lot here to like. “Til Death and Beyond” is filled with finger-shredding, whammy-shrieking solos and the welcome incursion of the oft-maligned by no-less enjoyable thrash gang chorus. And album closer “Ensanguined,” a 12-minute-long, out-of-nowhere behemoth features some truly impressive drum work, inspired doomy passages and enjoyable groove. But so much of what Steel Bearing Hand bring to the table, shiny though it is, feels tacked on, taped together, and utterly lacking in cohesion. As fun as some of these individual pieces are, the fact that none of them ever click into place to deliver a fully unified work is the fatal flaw for such a promising album. 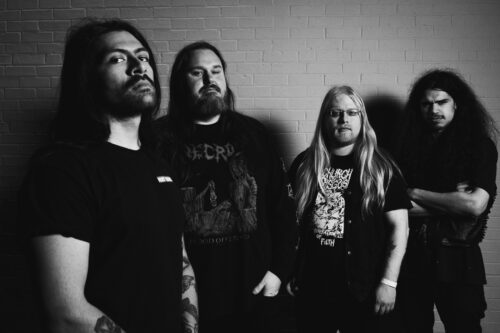 As Jury-rigged and imperfect as it is, Slay in Hell still features some truly laudable performances. While so much attention will undoubtedly go to the guitar work (and it is indeed impressive) the whole band uses their scant 39 minutes to show us what they can do. Lead vocalist Wyatt Burton pulls double duty here, delivering effective BM rasps on some tracks and a guttural yet decipherable growl on others. Unwilling to join other metal bassists in the growing ranks of the Newsted Club, Chris Bonner is given several moments to shine, and the album is all the better for it. The true kudos, however, go to drummer Anthony Vallejo, who’s fills, creativity and speed lend a desirable heft and intricacy to each track.

Steel Bearing Hand’s logo does indeed reveal a lot about the band, though not in the way I was expecting when I heaved Slay in Hell from the steaming AMG promo pile. Much like the design itself, this album feels pieced together and disconnected; tracks feel less like they were allowed to evolve organically between genres and more like they were forced together and told to play nice. It doesn’t work on the playground, and unfortunately, it doesn’t work here either. The good news is that Slay in Hell proves that Steel Bearing Hand certainly have the chops to deliver a more focused deathened thrash concoction in the future. As for their sophomore effort, however, you may come for the stand-out performances, genre-bending and to hear an over 12-minute closer that isn’t “Rime of the Ancient Mariner,” but you probably won’t stay too long.